Posted on January 31, 2016 by concernedcitizenforelephants 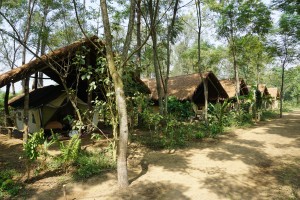 During a press conference on January 22, Tiger Tops chair Kristjan Edwards announced the move. “Tiger Tops introduced elephant safaris to the world. Half a decade later we now are ready to introduce a responsible way of using elephants in tourism,” he said.

Activities like riding, petting, feeding and taking selfies, contributing to using elephants as props, are no longer part of the deal,” she said. Instead visitors will be invited to observe the natural rhythm of elephants, when waking, grazing, bathing, playing, feeding and sleeping. They will get a chance to help mahouts cutting grass and making ‘kuchi’, an elephant snack. Instead of riding elephants in the jungle, visitors are invited to walk behind them while observing wildlife.

Tiger Tops markets itself as a leader in eco tourism and conservation activities. The company worked with the Smithsonian Institute and the Himalayan Tiger Foundation in the area tiger conservation. The Tiger Tops Elephant Camp is promoted as ‘another leap towards responsible and sustainable tourism’.

This entry was posted in chain free, elephants, Nepal. Bookmark the permalink.