Posted on January 23, 2018 by concernedcitizenforelephants

On October 19, 2017, my boyfriend and I arrived in Nepal anxious to see the wonderful wildlife in Shuklaphanta National Park. We arrived at the park the next day and had a generally successful trip spotting the wildlife as we saw a jackal, deer, crocodile, wild boar – and, yes, even a tiger!

As we drove back to Dhangadhi airport to catch our flight to Kathmandu about 11:00 a.m. on October 23, we saw a sight that would haunt us forever: Our guide announced that we would be stopping to “visit some elephants”. We saw three elephants with their front legs shackled so tightly, they couldn’t move! They couldn’t bend their knees, turn around or lay down at all. There were branches and leaves scattered in front of the elephants (we were told that was their “food”), but no water for them to drink anywhere in sight!

There were three elephants: two females and a male. The two females were chained next to each other and seemed resigned to their rotten situation, but the male was by himself and clearly distressed. Our guide kept telling us that he was angry and even the trainer had a hard time dealing with him. I said “Of course, he’s angry. When you keep him shackled to the point where he can’t even move his front legs, he has the right to be angry!”

“I am not a spiritual person at all, but I really did get a strong sense of communication from this poor boy. He kept reaching our his trunk to me and my boyfriend and it wasn’t in anger – he wanted to be touched and to let us know that he was clearly in distress. I swear, he was needing some human kindness from us and desperate to let us know he needed help!”

After both of us stroked his trunk. guides demanded that we stop touching the elephant for our own safety, so we moved back. One of our guides said to me “Ma’am, I know you love animals, but he is dangerous!”

While we were close enough to touch the last two feet of his trunk, he would have had a difficult time getting close enough to do any serious damage to us (maybe a hard slap or knocking us over, at worst, but nowhere near close enough to pick us up). But I honestly think he was smart enough to recognize that we were tourists and has probably experienced tourists providing him with food and affection, not as people that chain him or abuse him.

However, what really seemed to upset everyone there is that I kept asking about the shackles. And I was obviously taking photos of those shackles. This did not go over well with the elephants’ keepers, but I wanted answers about this inhumane situation.Our guides cut the visit short and we arrived at the airport very early that day. 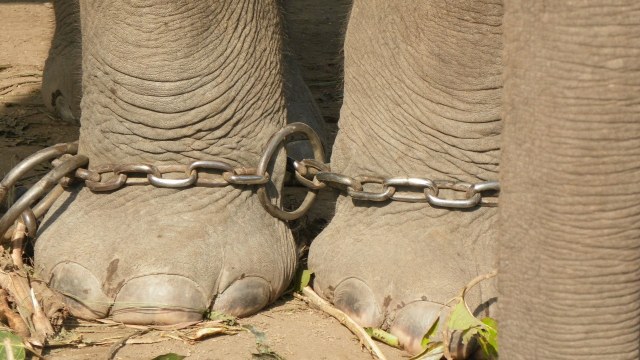 I vowed that I would not let this go until I know this situation was taken care of. If the keepers need to control these poor creatures, at least give them the dignity of shackling only one foot and giving them a long chain so that they can move around. And why was the male off to the side, away from the other elephants? They are social creatures and need companionship.

So I have been sending out the photos and information to every wildlife organization, elephant rescue and animal welfare group I can reach. I’ve posted this on my Facebook and Twitter pages (and the social media pages of others). I have posted a review on Trip Advisor. I will not stop until this awful wrong is stopped.

And for God’s sake, please give these poor animals some water!

This report comes to us from a tourist visiting Nepal during 2017. Please feel free to submit your own reports to: elephantwatchnepal.usa@gmail.com